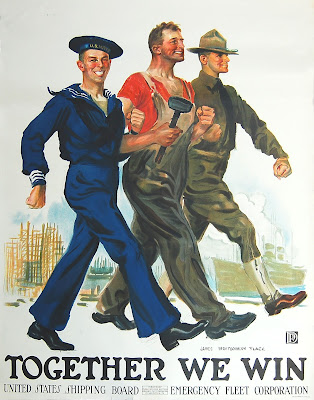 During a recent inventory project, the museum came across a small collection of World War I and World War II posters from the American and British home fronts. This particular poster, entitled “Together We Will Win,” is a World War I era poster issued by the United States Shipping Board Emergency Fleet Corporation. The  Emergency Fleet Corporation was an agency established to manage wartime merchant shipping after the United States declared war on Germany. James Montgomery Flagg painted the original scene of a seaman, civilian worker, and soldier walking arm-in-arm. Flagg is credited with creating nearly fifty other works to help support the home front war efforts during both World Wars. He is most famous for the iconic image of Uncle Sam in his  “I Want You for the U.S. Army” poster.
Posters like this one were extremely effective during World War I and were therefore utilized again during World War II.  These posters were designed to unite the American people on the home front (irrespective of race, class, gender, or age) and help to coordinate efforts to sell war bonds, conserve food, build a labor force, and recruit for the armed forces. The posters shared common themes and ideas with propaganda used around the world, including the importance of patriotism in times of war, a need for sacrifice, and the idea that it was the duty of citizens to either become soldiers or serve in war-related jobs at home. The “Together We Will Win” poster illustrated the importance of both military and industrial wartime service and the need to unite these services in order to achieve victory.