This year marks the seventieth anniversary of the Battle of Midway, one the most crucial American victories of World War II.  Admiral Raymond Ames Spruance, Task Force Commander of the United States Pacific Fleet during the battle, was awarded the U.S. Navy Distinguished Service Medal in recognition of his exemplary leadership.
Famed historian Samuel Eliot Morison called Admiral Spruance’s performance,  “superb,” describing him as “calm, collected, decisive, yet receptive to advice.” 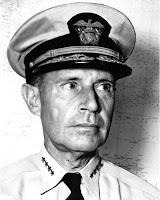 In 1948, the Naval War College released a report which detailed the overwhelming importance of the battle and the many accomplishments of Admiral Spruance and his forces. The report called the battle, "an overwhelming American strategically and tactical victory," and stated that, "By destroying four of Japan’s finest aircraft carriers together with many of her best pilots it deprived the Japanese navy of a large and vital portion of her powerful carrier striking force.” The report concluded that the victory improved American morale, demoralized Japanese forces, removed threats to Hawaii and the West Coast, and halted the dominant Japanese offensive action from the first six months of the war.

Spruance graduated from the Naval War College in 1927 and later returned to serve on the faculty as the head of correspondence courses from 1932-1933.  He also directed tactics instruction for the junior class from 1935-1936, and for the senior class from 1936-1937.  After the war, on 1 March 1946, Spruance returned as the College’s twenty-sixth president.   He oversaw educational preparations for the Cold War era, laid the foundations for a broader curriculum, and helped establish the Naval War College Review. The museum holds an impressive collection of Spruance's medals, swords, and uniforms. The Distinguished Service Medal is currently on display in the College's Spruance Hall along with other artifacts related to Spruance's naval service.