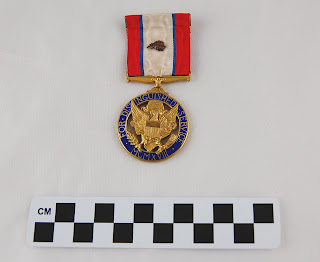 Admiral Henry Kent Hewitt (1887-1972) was highly decorated during his service with the United States Navy. His various honors included two Navy Crosses, two Navy Distinguished Service Medals, and various foreign decorations, including Great Britain's Order of the Bath.  In addition to these honors, Admiral Hewitt was one of a select group of naval officers to receive the Army Distinguished Service Medal.

Admiral Hewitt's naval career began in 1907 with the Great White Fleet’s cruise around the world and ended with his retirement in 1949. He achieved international recognition for his role in the Allied victory of World War II. As Commander, Amphibious Force Atlantic Fleet, Admiral Hewitt established Army troops ashore at North Africa during Operation TORCH.  This operation led to the surrender of the Axis Powers in French North Africa, thereby securing the Mediterranean Sea for future operations by the Allied Powers.  Hewitt then served as Commander of the Eighth Fleet and led amphibious forces during the invasion of Sicily and the landings at Salerno in 1943. While still in command the following year, he played an integral part in Operation DRAGOON, the landing of the Seventh Army for the invasion of Southern France. This operation forced the German Army to abandon that region.

Admiral Hewitt was awarded two Army Distinguished Service medals for his vital roles in Operation TORCH and Operation DRAGOON. The Army Distinguished Service Medal is awarded to any member of the United States Army who showed "exceptionally meritorious service to the Government in a duty of great responsibility.” Out of a total 1,458 Army Distinguished Service medals awarded during World War II, Admiral Hewitt was one of only thirty recipients from the U.S. Navy. The medal, authorized by Presidential Order on January 2, 1918, can be awarded to other service members, but only in wartime and under exceptional circumstances. The bronze medallion bears the Coat of Arms of the United States and hangs from a red, white, and blue ribbon.  This was a great honor and demonstrated the vital role Admiral Hewitt played in several large Army operations during the war. The first award was presented by Secretary of War Henry L. Stimson in January 1943. In lieu of a second medal, a bronze oak leaf cluster was given.

Admiral Hewitt’s awards and decorations, including this medal, are on display in the museum's Naval War College exhibit. Hewitt had a long and close relationship with the college. He lectured on naval gunnery in 1924 and 1925 and after graduating with the senior class of 1929, taught as a member of the Department of Operations, Strategy, and Tactics. He addressed the college on Operation TORCH in 1945. From 1946 to 1947, he served on special assignment and lectured on his wartime experiences. His contributions were honored when the college named the library and classroom building in his honor in 1976.