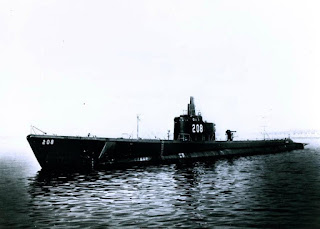 Yesterday was the anniversary of the loss of the submarine USS Grayback (SS-208). Launched in 1941, Grayback was very successful in combat and even rescued six survivors from a crashed B-26 on an island in Munda Bay. The submarine sailed from Pearl Harbor for her tenth and final patrol on 28 January 1944 bound for the East China Sea. Ordered home on 25 February she was expected to arrive at Midway on 7 March but never reached her destination. On 27 February, a direct hit from a Japanese plane sunk the submarine and nearby vessels dropped depth charges on the location.  USS Grayback received eight battle stars and two Navy Unit Commendations. She sunk fourteen vessels and 63,835 tons of shipping.  The museum collection holds the medals of the submarine's first lieutenant William Charles Roy.
﻿﻿﻿
Lieutenant Roy was born on 15 December 1919 in Allen, Indiana. At the time of his death he was residing in Berkley, California with his wife.  For his service to the United States Roy received an American Defense Medal, World War II Victory Medal, Navy Unit Commendation Award, Submarine Combat Insignia, a Silver Star, and a Purple Heart.

The Silver Star is the third highest award for valor in the United States Armed forces.   The citation for the medal states “Lieutenant Roy’s courageous conduct and steadfast devotion to duty under extremely perilous conditions were an inspiration to the officers and men with whom he served and in keeping with the highest tradition of the United States Naval Service.”

The President of the United States awards the Purple Heart to those wounded or killed in service. Preceded by the Badge of Military Merit established by George Washington in 1782, the medal was revived in 1932 as the Purple Heart award. The Submarine Combat Patrol Insignia is a pin worn by members of the Navy Submarine Service who have completed successful war patrols. Lieutenant Roy’s pin has three gold stars for three successful war patrols.