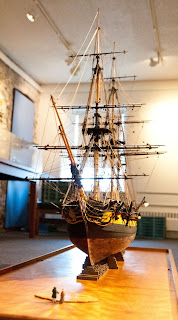 The United States Frigate Constellation, launched in Baltimore on 7 September 1797, was one of the first six frigates constructed by the United States Navy. Constellation was designed by Joshua Humphreys, Josiah Fox, and William Doughty in 1795 and built by David Stodder the following year.  The frigate was the first U.S. Navy ship to win a battle. During the Quasi-War with France, the ship, under the command of Thomas Truxton, captured the French frigate L’ Insurgente.

Constellation has had an interesting and confusing history since its launch in 1797. In 1853 the frigate was broken up at the Gosport Navy Yard in Norfolk, Virginia. Decades later there was a controversy over the sloop of war named Constellation whose keel was laid the same year the frigate was broken up. Many believed the original frigate was rebuilt as the sloop. After a century of service in the U.S. Navy, the sloop of war was saved and brought into Baltimore Harbor for preservation as a historic ship. She was soon chosen to be the focal point of the city's new Inner Harbor in 1955. This controversy fascinated the designer of the Inner Harbor, Thomas Todd, who researched and built this model in 1985.﻿

The scale of the model is one-quarter centimeters to one inch. Todd had many challenges building this model because of the controversy and because much of the information on the frigate's design was not recorded. Todd chose to use the design from Howard I. Chapelle’s American Sailing Navy and studied a 1797 article from the Baltimore Gazette which described the ship and the carvings by William Rush. Even with these resources, information was still needed. For example, the color of the ship and the figurehead ornaments were not known. Todd used the resources mentioned above and his knowledge of  late eighteenth century ship building practices to portray these pieces. He used white pine and bass wood for the hull, planking, and decks. The carvings, ornaments, and figures are box wood. Birch dowels were used for masts and spars, linen for rigging, bass wood for the boats, and   box wood for the anchors. 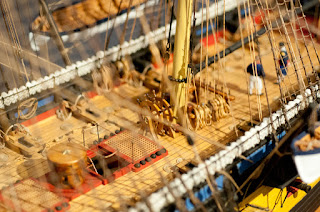