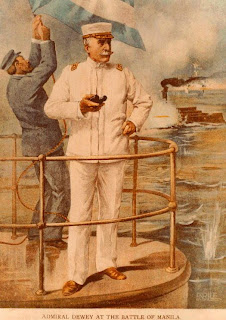 ﻿﻿﻿﻿﻿﻿On 1 May 1898, Commodore George Dewey led the Asiatic Squadron in the stunning victory against Spanish forces at the Battle of Manila Bay. The decisive engagement paved the way for the capture of Manila and the defeat of Spain in the Pacific during the Spanish-American War. News of the battle spread rapidly, making Dewey an instant American hero, and his flagship, the protected cruiser USS Olympia, an American icon.  Several days after departing Manila Bay for Hong Kong, the U.S. revenue cutter Hugh McCullough returned bearing official communications, letters of congratulations and the notice of Dewey's appointment to acting rear admiral. The telegram from Secretary of the Navy John D. Long, dated 7 May, read:

On the morning of 11 May, the broad pennant of commodore was hauled down and the two-star rear admiral's flag was hoisted at the main masthead. To mark the occasion, every warship in the bay fired a thirteen-gun salute.
﻿
However, the flag hoisted on Olympia that day was not a ready-made article retrieved  by an aide upon receipt of the telegram. In 1898 there were only six billets for rear admiral authorized by Congress. In fact,  Congress ultimately passed a law expanding the number of rear admirals to seven in order to create a vacancy for Dewey's  permanent promotion. Since Dewey was the ranking officer on station, there simply would not be a two-star flag immediately available. As a commodore (the equivalent of today's rear admiral lower half), Dewey flew the broad pennant; a forked blue banner with one white star. The construction of the museum's two-star "Dewey" flag suggests that the flagship's crew cut a new hoist out of canvas, stitched two available commodore pennants together, cut off the forked fly ends, and replaced them with two squared pieces of fabric. The unique circumstances under which the flag was created and its connection to a seminal event in American history make this artifact one of the many treasures in the Naval War College Museum collection.