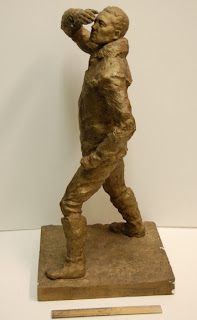 This week’s artifact in spotlight honors one of America’s greatest explorers, Rear Admiral Richard E. Byrd, USN. On May 9, 1926  Byrd and Chief Machinist Mate Floyd Bennett boarded their Fokker tri-motor airplane to make the first flight over the North Pole.  For this momentous achievement, Byrd and Bennet were awarded the Medal of Honor. Byrd's citation read, "for distinguishing himself conspicuously by courage and intrepidity at the risk of his life on 9 May 1926, in demonstrating that it is possible for aircraft to travel in continuous flight from a now inhabited portion of the earth over the North Pole and return."

Years later, doubts rose as to whether or not Byrd reached the North Pole and the matter is still disputed today. However, the naval aviator subsequently made the first flight over the South Pole and organized pioneering explorations of the polar regions using airplane, radio and other modern technologies. The artifact featured is a plaster statue of Byrd in his Arctic gear sculpted by Felix de Weldon. This statue shows Byrd in a different pose from the more famous likenesses the artist produced for Arlington Cemetery and McMurdo Station, Antarctica.