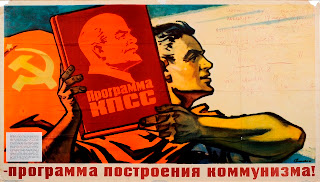 On 19 March 1962 the Russians abandoned the Soviet Arctic research station, North Pole 8 (NP 8) after a pressure ridge permanently destroyed its air transport runway.  These drifting ice stations, used since 1937, hosted teams of scientists researching oceans, weather, and geological patterns in the Arctic. Both the United States and the USSR studied the region for strategic value so when news of the abandonment reached the Office of Naval Research, the Navy and CIA launched Operation COLDFEET to gather intelligence from the station. On 28 May operatives parachuted onto the ice and collected information on station operations and efforts to develop Arctic anti-submarine warfare techniques. The team and the collected items were recovered by a B-17 employing the Robert Fulton Skyhook on 2 June.

This Russian propaganda poster was left hanging in a mess hall when the station was abandoned. A note in both Russian and English written by Chief of the Station "Romanov" (possibly V.M. Rogachyov) is still visible on the poster's upper right surface. The note informs anyone arriving at the station after 19 March to visit the Arctic Institute in Leningrad. It was later presented to the operation's leader Captain John Cadwalader, USN and donated to the museum by his grandsons.

Click on this Link to learn more about Operation COLDFEET and the Fulton Skyhook.