Since tomorrow, September 16, is POW/MIA Recognition Day it is the perfect opportunity to showcase artifacts from the museum collection related to the Vietnam Prisoner of War Experience.


Upon his retirement in 2006, Naval War College Professor Emeritus Porter A. Halyburton donated objects and papers related to his seven years of captivity in North Vietnam. As a navy pilot, LTJG Halyburton flew in 75 combat missions over Vietnam off USS Independence (CVA-62) before his F-4B Phantom was shot down near Hanoi on 17 October 1965. Over the next seven years he was mistreated and tortured in various prisons, such as the "Heartbreak Hotel" and the "Hanoi Hilton."

Halyburton and his fellow prisoners endured because of their leadership training, their faith in their country, their unity and faith in each other, and because of their amazing resourcefulness. They invented a tap code to pass along news and encouragement through cell walls.  Halyburton used mental exercises to memorize names and details for over 300 fellow prisoners. He and the others also taught themselves to speak German based on their shared knowledge of the language. He even used a handmade bamboo ink pen to write a diary. 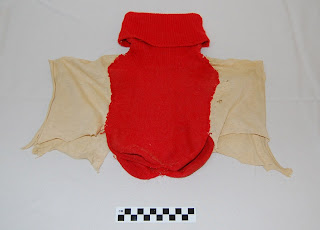 The artifacts in this collection are all powerful examples of the material culture of the prisoner of war experience as they all tell the story of this extraordinary resourcefulness. The collection contains two items used during all seven years of Halyburton's captivity: an enameled drinking cup and the T-shirt worn when he was captured.  Perhaps the most versatile piece of equipment was a pair of red socks he received in the first care package from his wife Marty. Though he wore them on his feet at first, Halyburton later used them as gloves and Christmas stockings before finally sewing them to a shirt to make a dickey for extra warmth in winter. Some of the other artifacts from the collection are: