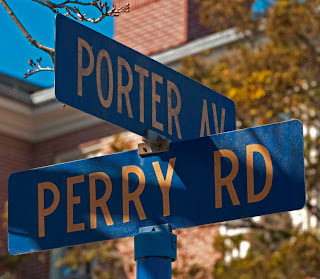 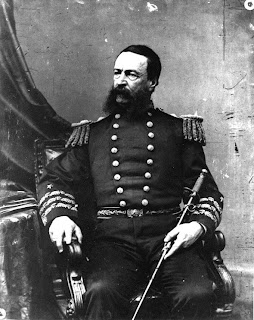 Porter Avenue on Naval Station Newport is named for the famous admiral David Dixon Porter. The son of Commodore David Porter and foster brother of Admiral David Glasgow Farragut, Porter first saw service with the Mexican Navy in the late 1820s before obtaining a midshipman's warrant in the U.S. Navy. During the Mexican War, Porter served as first lieutenant on USS Spitfire and after the attack on Tabasco he was given command of that vessel. He rose to prominence during the American Civil War and held command during several significant operations. As commander of the Mississippi Squadron, Porter supported U.S. Grant's successful assault on Vicksburg. After the unsuccessful Red River Expedition, Porter took command of the North Atlantic Blockading Squadron and led his forces during both attacks on Fort Fisher, North Carolina.
After the war, Porter was appointed Superintendent of the U.S. Naval Academy and promoted to vice admiral. In 1869, while advising the Navy Department, he campaigned for an experimental facility where navy personnel could test torpedoes, mines, and other explosives. His efforts led to the establishment of the Naval Torpedo Station on Goat Island, Newport in July of 1869. The station was the first permanent naval installation in Newport and was soon followed by the Naval Training Station (1883) and the Naval War College (1884). Porter was promoted to admiral and made the navy's senior officer in 1870.
Street Sign Image by Christina Anderson
Porter Image, Naval History and Heritage Command