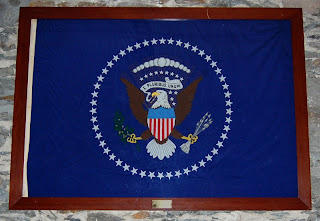 ﻿﻿ Most who are familar with President Dwight David Eisenhower will immediately associate places such as Gettysburg and Camp David as the president's favorite getaway spots during his two-term administration (1953-1961). Few would think of  Newport, Rhode Island with its exclusive mansions, and extensive naval bases as the vacation spot of a former Army general. However, President Eisenhower vacationed here during the summers of 1957, 1958, and 1960 and lived at the Naval Station during the first summer visit.
﻿
﻿

Ike arrived at Quonset Naval Air Station on 4 September 1957. He gave a speech at the Old Colony House and proceeded to the base to set up residence. Staff and press offices occupied structural additions to the Administration building (now known as Founders Hall, the original site of the Naval War College and home to the NWC Museum) while the president and first lady resided in Quarters A (now home to the Naval Station commander). While occupying the home, Eisenhower signed the 1957 Civil Rights Act and ordered federal troops to Arkansas to enforce integration at Little Rock Central High School.
Upon returning to Newport in 1958, President Eisenhower set up his summer White House at the former Commandant’s House at Fort Adams. On his last visit in 1960, he presented this flag to the officer, enlisted, and civilian personnel of the naval base. The presidential coat of arms is surrounded by 50 stars. Eisenhower’s executive order adding the 50th star for the state of Hawaii became effective on July 4th of that year. The flag is currently on exhibition in the Naval Station gallery along with a guest register for the Naval Hospital Chapel signed by him and first lady, Mamie.
Why did the former Supreme Allied Commander and graduate of the U.S. Army War College choose to vacation on Coasters Harbor Island, home to the naval station and the Naval War College? The golf of course! The historic Newport Country Club maintained one of the oldest golf courses in the nation. His visits certainly left a legacy: in addition to "Eisenhower House" at Fort Adams, Newporters named the grassy space on Washington Square, "Eisenhower Park."
Click here to view Eisenhower's daily schedule for the month of September 1957 or here for his entire second term including Newport visits in 1958 and 1960.
Transfer from Naval Station Newport                                                                  88.47.01
Images courtesy of the Naval War College Museum
Email Post
Labels: Artifact Dwight D. Eisenhower