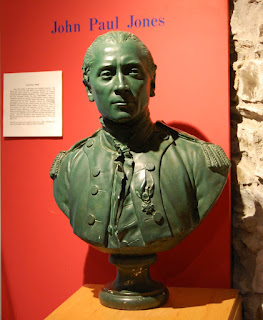 This plaster bust of naval hero John Paul Jones (1747-1792) is a copy of an original marble bust by renowned sculptor Jean-Antoine Houdon. The marble bust was commissioned in 1780 for the Masonic Lodge of the Nine Sisters in Paris, where Jones was a member. Many praised the sculpture for its faithfulness to the subject. James Madison wrote, “His bust by Houdon is an exact likeness; portraying well the characteristic features stamped on the countenance of the original.” Jones himself was so impressed with his portrait that he ordered plaster copies for friends such as George Washington and Benjamin Franklin; men who had also been sculpted by Houdon. The bust would be important a century later when trying to locate the subject's unmarked grave.

Jones, who was just 33 years old at the time the sculpture was completed, died twelve years later in Paris. As he died in the midst of the French Revolution, his funeral did not attract much attention. He was buried in an unmarked, and eventually, forgotten grave in small Protestant cemetery. Fortunately, his body was prepared for burial in a way that made the discovery 113 years later possible. Jones was placed in a sealed lead coffin which was completely filled with alcohol to preserve the body. As some may have predicted, the United States did want Jones’ body back over a century later.  Under the orders of President Theodore Roosevelt, a team was assembled to find the body and return it to the United States for reinterment.  The team eventually found the cemetery that contained Jones’ remains.  They were then able close in on the correct grave through the discovery of five lead coffins. Three of the coffins had their owner’s names.  A fourth coffin was for made for a man over six feet tall, (John Paul Jones was 5’7" tall). The fifth coffin was sealed shut.

When the remains inside the sealed coffin were inspected, facial measurements from an early 1780 copy of the Houdon bust were compared to the remains in question. There was an astounding similarity between the bust and the remains; the maximum difference in measurement being two millimeters. An intensive autopsy and use of the bust of Houdon allowed for researchers and doctors to positively identify the remains of John Paul Jones. With the positive identification, the team of researchers was able to bring Jones back to the United States. In 1906, he was reinterred with full military honors at the United States Naval Academy chapel in Annapolis, Maryland. The original marble bust from the Masonic Lodge of the Nine Sisters is now at the academy as well.

Though a twentieth century copy, the bust on display at the Naval War College Museum was made from a 1780 copy at the Louvre for sculptor Felix de Weldon. de Weldon presented the copy to the Naval War College in 1964. The bust has remained a fixture at the museum to recognize Jones as captain of the Continental sloop Providence during the American Revolution.