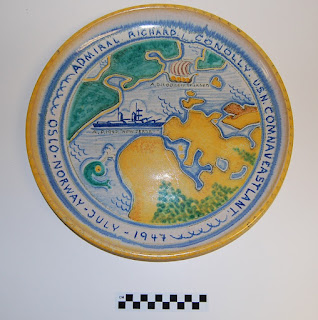 This decorative ceramic plate commemorates Admiral Richard L. Conolly's visit to Oslo, Norway in July of 1947.  Soon to be President of the Naval War College, Conolly was then Commander, U.S. Naval Forces Eastern Atlantic and Mediterranean. He commanded a task force that carried over 2,000 midshipmen on a training cruise across the Atlantic that summer. Joining the flagship USS New Jersey (BB-62), was the USS Wisconsin (BB-64) and several destroyers. This fleet left the U.S. Naval Academy with its eager complement on June 7 and set to return in late August.  There impressive itinerary for the cruise included Edinburgh, Oslo, Copenhagen, London and Guantanamo Bay. Though port calls offered a welcome distraction, the cruise offered valuable training in gunnery, seamanship, and shipboard operations. Midshipmen learned the tasks of daily life at sea and the skills needed to successfully run a ship during peacetime and in war.
The unknown artisan hand painted the words "Admiral Richard L. Conolly, U.S.N., COMNAVEASTLANT, Oslo-Norway-July-1947" around a scene of the Atlantic Ocean that includes the coasts of North and South America, as well as Europe and Africa. Conolly's flagship, the battleship New Jersey, is depicted along with a Viking ship to tie this visit to Leif Ericson's voyage from Norway to North America in the year 1000. It is conceivable that Norway's King Haakon VII presented this to Conolly during his inspection of the battleship on July 2.

When the division departed for Portsmouth, England, they were reviewed by Crown Prince Olav of Norway.  In their June 1948 National Geographic article documenting the cruise, Midshipmen William J. Aston and Alexander G.B. Grosvenor recalled, “Leaving Norway, we witnessed a magnificent demonstration of seamanship. Crown Prince Olav reviewed our battleship division as we steamed for Portsmouth, England. Rather than use a destroyer or large yacht, he stood in the cockpit of a 50-foot cruiser tossing and yawing in the choppy mouth of Oslofjord. Throughout the passing of our ships, the Prince adhered to the adage of the sea 'One hand for the ship and one for yourself.' Never before had we seen a boat do four-dimensional gymnastics. Yet at all times the Prince had his right hand raised smartly in salute as Wisconsin fired the 21 guns reserved for chiefs of state and royalty.”