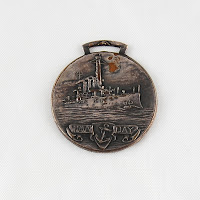 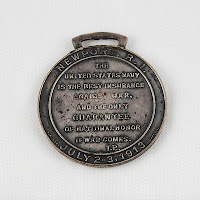 A medal donated to the museum a few years ago tells an interesting story about one of Theodore Roosevelt's many visits to Newport.  The obverse of the medal features the image of a battleship, a fouled anchor, and the words, "NAVY DAY." Once containing a ribbon (not included) the medal was worn in commemoration of a two-day celebration held from July 2-3, 1913 in Newport, Rhode Island. Former President Theodore Roosevelt, hosted the event, held on Easton's Beach, as a political rally for the Progressive (or Bull Moose) Party he had formed the previous year.   An immense clam bake that boasted two hundred bushels of clams and hundreds of pounds of potatoes, corn, and watermelon, was served in a large tent constructed on the beach. Though the tent could shelter up to four thousand people, only twelve hundred attended the feast. The political leaders of the Progressive Party spoke to the crowds over the two days. Roosevelt gave a powerful speech regarding the importance of the Navy, in which he proclaimed, "The United States Navy is the best insurance against war, and the only guarantee of national honor if war comes.” The words were inscribed on the reverse of the medal.  The former President of the United States and Assistant Secretary of the Navy followed the great success of this speech with a review of the apprentice seamen at the Naval Training Station.  These celebrations of the nation's sea service earned this Progressive political rally the title of "Navy Day." This local event for a national political party should not be confused with the Navy Day celebrated on October 27 from 1922 to 1949.

The Newport Mercury called the Progressive party’s rally a “fizzle.” Thousands of visitors were anticipated to arrive within the city, yet smaller numbers attended. Still, the medal demonstrates the importance of Newport as a home to the U.S. Navy during its long history.  Theodore Roosevelt had visited the Naval War College and Naval Station on many occasions and would return again before his death in 1919. The medal is just one of many artifacts in the museum collection that represent the naval history of Narragansett Bay.