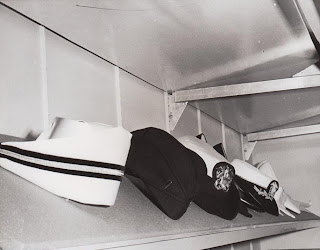 The Naval War College Museum is honoring Women’s History Month by recognizing the history of women in the Navy.  It is a fitting time to share the recent donation of photographs from the opening of the Women Officers Uniform Shop at Naval Station Newport in 1966.

Women have officially served in the U.S. Navy ever since the Navy Nurse Corps was established in 1908. Over 90,000 female officers and enlisted personnel served as part of the WAVES (Women Accepted for Volunteer Emergency Service) during World War II.  In 1948 the Women's Armed Service Integration Act authorized women to serve in the military during peacetime. In previous blogs we wrote about the local ties of one of the first seven women promoted to captain and the first female master chief petty officer in the U.S. Navy. The donation of these photographs revealed that Newport was the location of another milestone. The first ever Women Officers Uniform Shop in the U.S. Navy was opened at Naval Station Newport on 11 October 1966. 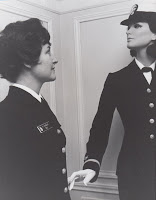 The shop, operated by the Navy Exchange, was set up primarily to serve the needs of trainees at the Officer Candidate School. The 700-square foot facility was located in building 36, adjacent to Toyland. Originally a warehouse, the building was redesigned in a residential style and painted in pastel colors. The building does not exist today, but was in the approximate area of Sims Hall at the Naval War College. The shop served approximately 2,000 personnel a year, including chief petty officers, Navy nurses, nurses of the Public Health Service, and Coast Guard officers. It included racks of uniforms, hats, shoes, dressing rooms, and a tailoring section.

During the opening, Navy Exchange officer Lieutenant Commander Glenn L. Gaddis noted that the shop was, "another demonstration that the Navy takes care of its own." Captain R.P. Nicholson, Commanding Officer of NAVSTA Newport reflected that, "This Uniform Shop cannot help but have a very decided effect upon the personal attitudes and morale of all women Naval personnel." He addressed the ways in which the Navy Resale System responds to the needs of the Navy and noted, "To the extent that we can continue to provide the best possible service to all components who form our loyal and devoted members, we can promise you, "'it will be done.'" Captain Rita Lenihan, Bureau of Naval Personnel Assistant Chief for Women, attended the ceremonies and later wrote that the shop created great interest among the officers, many of whom were frustrated with delays in the construction of WAVES barracks.

The Women Officers Uniform Shop has since been replaced by the Uniform and Tailor Shop to service both men and women. 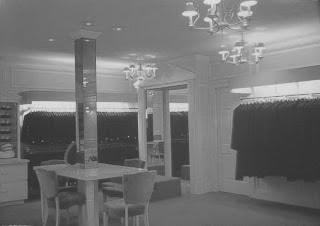