Busts of Agrippa and Themistocles: Classical Studies at the Naval War College

Classical studies have always been an important part of the curriculum at the Naval War College.  Historical case studies, such as the Peloponnesian War, encourage students to think more broadly about their profession by concentrating on strategic principles. Former president Captain William Ledyard Rodgers (1860-1944), who graduated with the class of 1895 and served on the staff in the early 1900s, was a student of the classics and wrote several books on the military history of the ancient world. In 1936, Rodgers donated marble busts of the Roman general Agrippa and the Athenian general Themistocles to the Naval War College in hopes that they would remind students of the importance of the Classics in the study of naval warfare.


As President of the Naval War College from 1911-1913, Captain William L. Rodgers was instrumental in shaping the curriculum. In The Field of Work to be Filled by a Naval War College he outlined the three goals of the college: to prepare officers for leadership and command in wartime, to develop the art and science of naval war by study and research, and to aid the General Board in war planning. The second objective in particular highlights the importance of studying works such as Thucydides' History of the Peloponnesian War (still required reading today), and the lessons of Themistocles and Agrippa's victories. In his 1936 letter donating the busts, Rodgers wrote, “I fear their great deeds and their places in the history of naval warfare is little known to most…The variety of fields of action of both put them above all modern admirals that I know of, who were good at their own profession only. These were great in all that they attempted.”   At the time, Rodgers was writing,  Greek and Roman Naval Warfare: A Study of Strategy, Tactics and Ship Design from Salamis (480 B.C.) to Actium and the two generals left quite an impression. 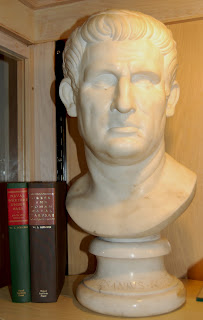 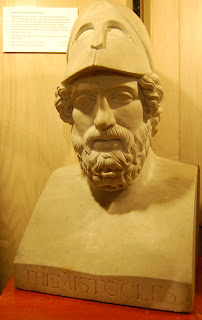 Themistocles was an Athenian statesmen, orator, and general who lived from 514-450 B.C. He was responsible for the development of an Athenian fleet and in 483 B.C. he persuaded the Assembly to modernize and enlarge the navy. Themistocles’ navy defeated the Persian invasion at Salamis. Rodgers wanted students to know that, “…besides being a great admiral, Themistocles was a statesman, diplomatist and ruler, and that a Salamis he turned back the invasion of an alien civilization and preserved Europe.”
Marcus Vipsanius Agrippa was a Roman statesman, general, and admiral who lived from 63-12 B.C. Of Agrippa Rodgers wrote, “As a naval tactician, he altered the Roman system of tactics which had lasted for two centuries and won success by the change.” Agrippa was instrumental in defeating Marc Antony and Cleopatra at the Battle of Actium in 31 B.C.  The fleet he built, trained, and directed solidified Roman power in the Mediterranean, Mare Nostrum.

Rodgers understood the importance of what these two warriors achieved strategically. His prescient gift supported the college's strong emphasis on history which continues to this day. No longer adorning halls and classrooms at the college, the busts now form part of the exhibit Sailors and Scholars: The History of the Naval War College on the museum's second floor.