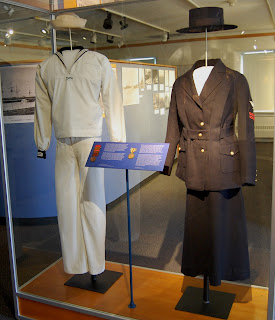 In honor of Women’s History Month, the museum  recently installed a World War I era Second Class Yeoman (F) uniform in the Naval Training Station Gallery. As the United States entered the war, every able bodied man was needed to fight, but many held non-combat support positions. The Naval Act of 1916 called for all citizens, to join the Naval Reserve Forces, and opened the door for women to join the Navy.

The broad language of the act was interpreted to allow the Navy to enlist women as Yeoman (F), nicknamed “Yeomanettes,” in the Naval Reserve Force, Fourth Class: the Naval Coast Defense Reserve. The “Yeomanettes” served as clerks, cryptographers, radio operators, truck drivers, electricians, camouflage designers, telephone operators and munitions makers.  They allowed men in these positions to be free to go to war.  A total of 11,275 women were enlisted by war’s end.

Newport hosted a large concentration of the new female recruits. Several hundred served in Newport at the Supply Office, Second Naval District. Even greater numbers trained at the Yeoman School on base prior to their wartime assignments.  Since Founders Hall, the current home of the museum, funcitoned as the base administration headquarters during the war, many Yeomanettes served within its walls. The World War I era Second Class Yeoman (F) uniform on display includes the single-breasted blue service coat, skirt, and straight-brimmed sailor hat. This uniform also would have included black shoes, stockings, a white shirt waist, and a cape for cold weather. The women who served were awarded the Victory Medal for their contribution to the American war effort.

Visitors can see the “Yeomanette” uniform on exhibit and learn more about the role of these women in the naval history of Narragansett Bay.