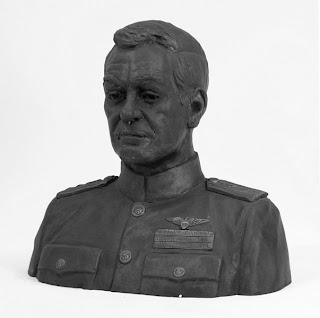 The Naval War College Museum holds an impressive collection of over forty sculptures by Felix de Weldon (1907-2003) the renown sculptor of the United States Marine Corps Memorial in Arlington, Virginia.  A longitme resident of Newport and great supporter of the Naval War College, de Weldon donated busts and reliefs of twelve College presidents which he sculpted from 1946 to 1990. The last of these was a portrait of Rear Admiral Ronald J. Kurth, the 45th President of the Naval War College. Kurth relieved Rear Admiral John A. Baldwin, Jr. on August 11, 1987 and served until July 17, 1990. The plaster bust, painted to look bronze, was presented to the College by the artist in 1993.

Over the course of his naval career, Kurth served as a pilot, professor, Pentagon administrator, and diplomat. He received a Bachelor of Science degree in Engineering at the U.S. Naval Academy. He later earned his masters in Public Administration and his doctorate in Political Science of the Soviet Union/Russia at Harvard University. He taught the Russian language at the U.S. Naval Academy and served in several positions at the embassy in Moscow. 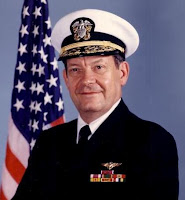 During his presidency, Rear Admiral Kurth led a successful campaign to receive institutional accreditation in order for the College to grant master’s degrees. This step not only made the college the oldest graduate-level military institution in continuous existence in the world but also, the first institution of its type to be accredited at the graduate degree level. Upon leaving the presidency of the War College, Rear Admiral Kurth retired from the United States Navy after a 36-year career. Subsequent to retirement, Kurth served as President of Murray State University in Kentucky, Dean of Academic Affairs at the Air War College, and President of St. John’s Northwestern Military Academy in Wisconsin.