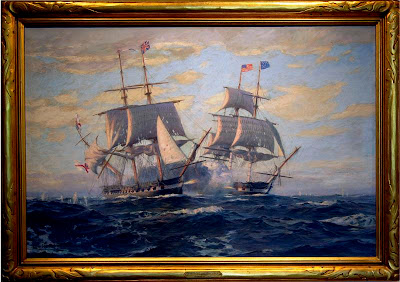 On August 19, 1812, the 44-gun frigate USS Constitution engaged the British Royal Navy frigate HMS Guerriere. The famous battle in which the American ship dismasted Guerriere and captured her crew, took place approximately 400 miles off Nova Scotia.  The victory was the first of many ship-to-ship actions that displayed the impressive gunnery skills of American crews and the fortitude of American vessels. Though the Royal Navy vessels vastly outnumbered American ships and their blockade confined most merchant and naval vessels to ports, victories such as this improved morale and influenced generations of naval officers. Accordingly, this battle is one of the most often painted scenes in the Age of Sail.  The museum has a wonderful oil on canvas of the engagement painted by the prolific maritime artist, Charles Robert Patterson in 1928.

The painting is one of a series of four commissioned by Edward J. Berwind who was the last surviving member of the USNA class of 1869. The other three paintings were done of the battles between Bon Homme Richard and Serapis in 1779, United States and HMS Macedonian in1812, and Constellation and L'Insurgente in 1799.

Charles Robert Patterson was an English painter born on July 18, 1878 in Stockdalewath, Cumberland, England. He was a son of a shipbuilder and always had a deep fascination with the sea. In 1892 he went to sea as a cabin boy on a ship out of London and spent fourteen years at sea on board various vessels. Between voyages Patterson spent time studying art and moving around the United States. In 1920 he became a United States citizen and spent time on a number of U.S. warships to witness battle maneuvers. His works lead a revival movement in the romance and beauty of the Age of Sail in art. He created hundreds of works related to maritime themes including many for the U.S. Navy. Before his death in 1958, he painted several lunette murals in the U.S. Naval Academy's Memorial Hall.