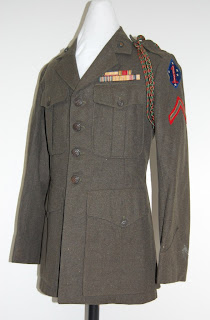 Happy Birthday to the United States Marine Corps! As the Marine Corps celebrates its 236th birthday today, it is appropriate that we focus this week’s post on a collection received from the family of a local who joined the Marines during World War II. The late William Ferreira, a native of Fall River who grew up in Newport, completed recruit training at Marine Corps Recruit Depot, Parris Island in the spring of 1945 and reported for duty with the 5th Marine Regiment of the 1st Marine Division. The division had distinguished itself at Guadalcanal, Peleliu, and Okinawa in the Pacific.

Pvt. Ferreira’s service coat for the Service A uniform (“Alphas”) is shown here. On the left sleeve of the service coat is a unit patch for the 1st Marine Division. The Southern Cross (a constellation of stars which can be viewed only in the southern hemisphere) is shown by the five stars, while the number one with “Guadalcanal” indicates action at the 1942 Battle of Guadalcanal. Located on the left shoulder is the red and green braided Fourragere. The Fourragere was awarded to the 5th Marine Regiment by the French government for “especially meritorious conduct in World War I.” As this honor was conferred upon the entire regiment, it is still a part of the uniform today.   During his service as a Marine, Pvt. Ferreira was awarded (from top left to bottom right) the following ribbons: Presidential Unit Citation, World War II Victory Medal, American Campaign, Asiatic-Pacific Campaign, and the Navy Occupation Service Medal.
In September of 1945, the 5th Marine Regiment was deployed to Peiping (Bejing), North China for occupation duty. They remained in China until May 1947.  While there, Ferreira acquired the jacket below as a souvenir of his service overseas. The jacket is embroidered with a dragon surrounded by “North China” and “1946." The “U.S.M.C.” was probably added on later as it does not appear to be part of the original embroidered work. 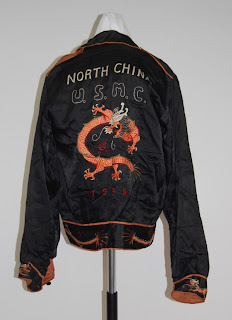 After his tour, William Ferreira returned to Aquidneck Island and settled in Portsmouth. He passed away on February 1, 2003 and is buried at St. Columba Cemetery in Middletown.