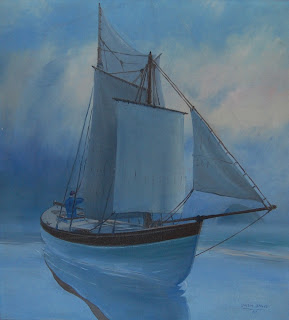 On 18 November 1870, five men set out in the captain's gig of the USS Saginaw from Ocean Island for Hawaii.  The side wheel steamer had recently completed a dredging operation off Midway and was on her way home to San Francisco when she struck a reef and grounded off Ocean Island. The entire crew was shipwrecked on the remote atoll. Led by executive officer, Lt. John G. Talbot, four of them were sent on a rescue mission to bring relief to their shipmates. Thirty-one days after leaving Ocean Island, they neared the Hawaiian Islands when disaster struck a second time. Off the coast of Kauai, the boat was overwhelmed by the surf and foundered. All aboard perished, except for Coxswain William Halford. Halford did finally obtain help for his marooned shipmates who were rescued in January 1871. For accomplishing his harrowing mission, he received the Medal of Honor.

The gig is part of the Naval History and Heritage Command collection and is on loan to the Historical Society of Saginaw County in Michigan. The Saginaw wreck was discovered in 2003.
Email Post
Labels: Artifact USS Saginaw