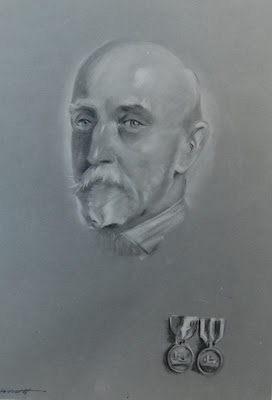 On December 1, 1914, Alfred Thayer Mahan died at the United States Naval Hospital in Washington, D.C. Mahan gained international fame for his book, The Influence of Sea Power Upon History, 1660-1783, published in 1890. The book, based on his lectures at the Naval War College, was arguably the most influential treatise on naval strategy ever written. Mahan taught seamanship as a young lieutenant while the United States Naval Academy was in Newport during the Civil War. Stephen B. Luce asked him to be the Naval War College's first lecturer of naval history and tactics when the college was founded in 1884. He later served two terms as president (1886-1889 and 1892-1893). His theories on naval warfare and strategy are still studied all over the world.

This pastel, actually a copy print of the original color work of art, was donated by the artist Thomas A. Synnott in 1990. Synnott originally sketched the portrait of Mahan in 1953 at the request of Rear Admiral Richard W. Bates. Bates presented the likeness to the National War College in Washington D.C.