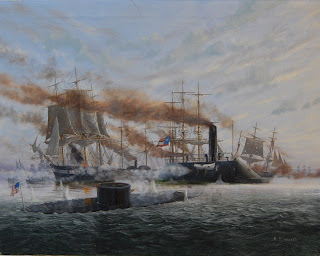 Today is the 150th anniversary of the Battle of Hampton Roads. Although many naval engagements took place during the Civil War, this battle between the ironclad warships USS Monitor and CSS Virginia (formerly USS Merrimack)  forever changed the manner in which naval vessels were designed and built.

On March 8, 1862, the Confederate ironclad CSS Virginia sailed into Hampton Roads, Virginia with the James River Squadron.  Among the wooden blockaders of the United States North Atlantic Blockading Squadron were USS Cumberland,  USS Congress, and USS Minnesota. Virginia rammed Cumberland below the waterline, causing the wooden ship to sink rapidly. After forcing the surrender of USS Congress, the Confederate ironclad set fire to the Union frigate.  Minnesota then ran aground. The next day, Virginia returned to finish off the USS Minnesota but was met by the new ironclad USS Monitor. The two vessels pounded away at each other's armored plates. Though each would claim a victory, the battle was effectively a draw. Following the Battle of Hampton Roads, the Union Navy quickly built more "monitors" and put them into action. The days of the wooden hulled warship were at an end. The world's navies stepped up production of iron vessels which, with their revolving turrets, became forerunners of the modern battleships.
British maritime artist, Edward D. Walker commemorated the Battle of Hampton Roads in his 1981 oil painting. The turreted USS Monitor and the CSS Virginia dominate the foreground. The artist has enhanced the contrast of past and future by surrounding the revolutionary iron warships with the older wooden sailing and steam ships.

The Battle at Hampton Roads is currently on exhibit in "The Navy in Art" gallery at the Naval War College Museum.