The museum is fortunate to have a very fine nineteenth century oil painting of USS Supply in the collection. In late 1846 the United States Navy purchased a ship-rigged sailing vessel for service in the Mexican-American War. That ship, the USS Supply, was commissioned in Boston on December 19, 1846.  During over three decades of service, the store ship supplied naval vessels and operations in the Gulf of Mexico, Middle East, Far East, West Africa, and the Mediterranean. 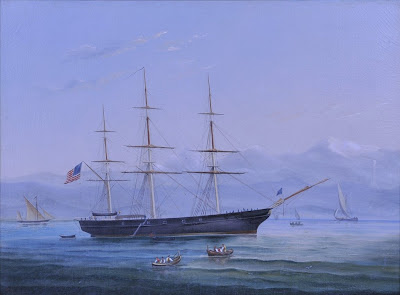 One of Supply's most notable missions occurred in 1853 when she served as Commodore Matthew C. Perry’s store ship on the expedition to open Japan. On July 8, 1853 the "black ships" of Perry’s expedition entered Toyko Bay changing the course of history for both nations. Just before the Civil War, Supply supported the operations of the United States Navy's African Squadron. During the war the vessel supplied blockading squadrons and even captured the Southern blockade runner Stephen Hart off Sarasota, Florida. The USS Supply was decommissioned April 23, 1879 in New York and sold five years later.