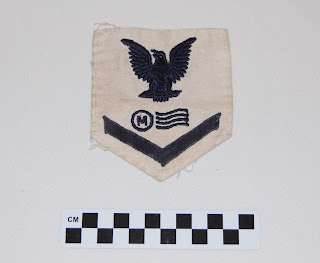 Mail service has always been an integral part of the United States military. In 1908 Congress authorized U.S. post offices on board naval vessels and the Navy established the rate of mail clerk.  In 1942, the Navy instituted the rate of Specialist—Mail  (Sp (M)) to deal with the challenges of increased mail delivery during World War II. These specialists often came from the civilian postal service and were assigned duties at stations but not vessels. One year later, the Navy established a training school for mail specialists. Recognizing the need for qualified individuals to handle mail, the Navy later created the new rate of mailman in September of 1944. This rate posed no limitation on service and thus a mailman could serve aboard ships.


The Navy mailman shared many of the same responsibilities to their civilian counterparts. They  classified mail (first class, second class, domestic mail), prepared mail, and provided services such as return receipt, registered mail, airmail, special deliveries, and special handling. Mailmen sold stamps, sorted and examined mail, ordered mail supplies for sailors on board, and forwarded mail. One of their unique responsibilities was keeping a directory of all personnel aboard ship, those expected aboard, and those recently detached or transferred. On a ship with a fluctuating number of sailors on board at any given time, this was a large and ongoing responsibility.

The badge pictured is the rating badge of Mailman 3/c Jack O’Donnell.  The blue Petty Officer eagle is embroidered above an encircled “M” with four wavy lines representing a postal cancellation.

The mailman rating was utilized by the Navy from 1944 until 1948 when these duties were absorbed into the rate of teleman. The rate later changed to postal clerk in 1959. On 1 October, 2009, the rates of storekeeper and postal clerk were merged into one rate—logistics specialist.