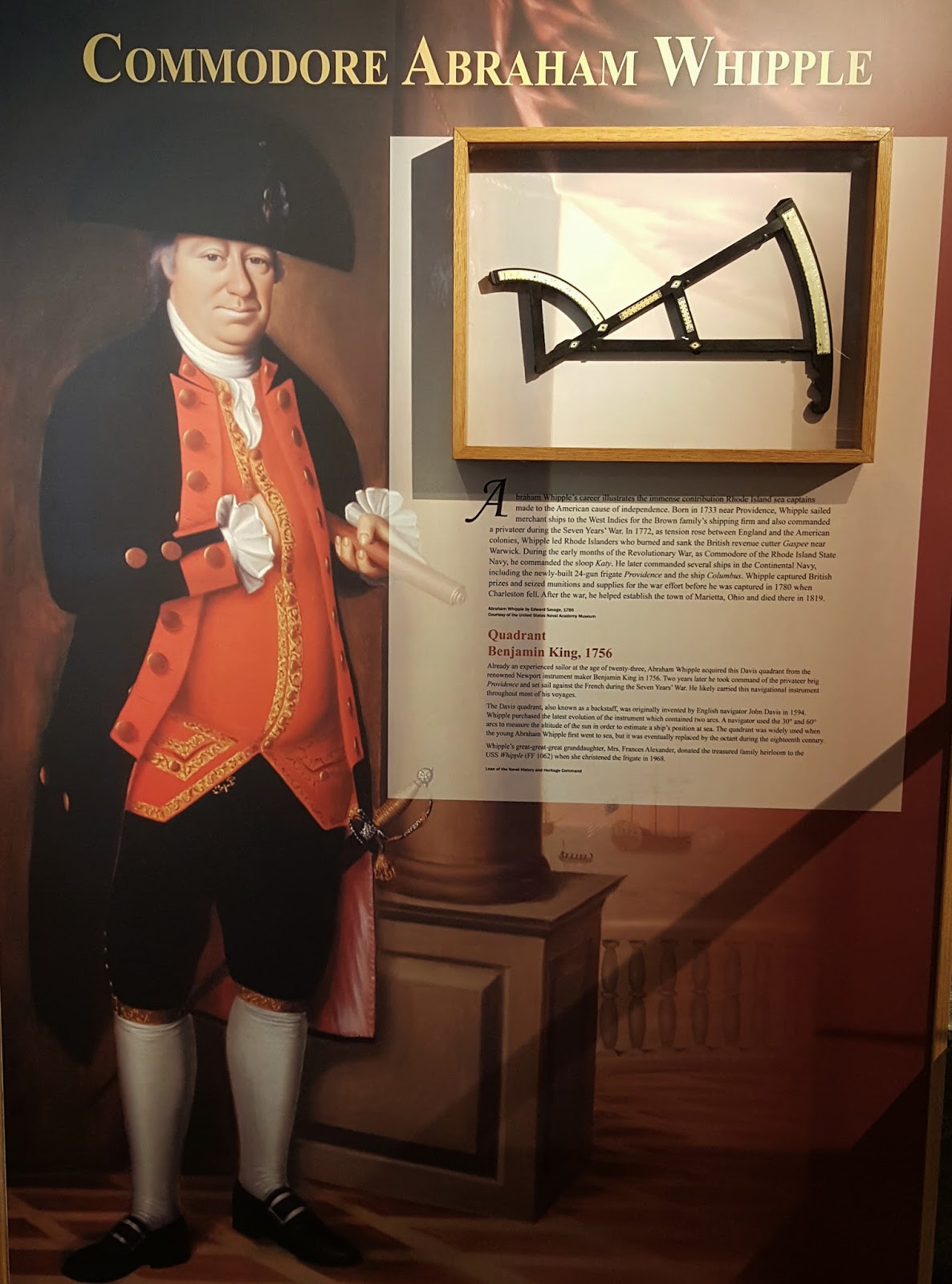 Abraham Whipple was born in 1733 near Providence, Rhode Island.  He went to sea and, over time, became one of the key ship captains for Moses and John Brown.  During the French and Indian War (1754-1763) he became a privateer and captured over 23 French vessels.

As the colonist became increasingly rebellious against the imposition of taxes to pay for the defense of the colonies by the British, the British became more adamant in their enforcement of anti-smuggling laws and collecting taxes.  Violence was becoming more commonplace.  In Narragansett Bay, on June 9, 1772, the HMS Gaspee, a ship conducting anti-smuggling operations, grounded while chasing the Hannah.  Seeing the ship aground, Abraham Whipple and John Brown led a group of men in the capture of the Gaspee.  They captured the vessel, looted it, and then set it on fire.
With the coming of the Revolutionary War, Whipple was appointed commodore by the Rhode Island General Assembly and given command of the sloop Katy.  Katy would be re-named Providence when taken into the Continental Navy.  Whipple was an active captain and aggressively engaged the enemy.  Ultimately, he was captured following the surrender of Charleston, SC, in May 1780 and would have no further part in the war.

Abraham Whipple is honored to this day in Rhode Island with every town having a Whipple Street, a park, or a road.  Naval Station Newport has one such example.  Additionally, the capture of the HMS Gaspee is celebrated annually in the state of Rhode Island during the Gaspee Days Celebration.
There have been three ships to bear the name USS Whipple in the U.S. Navy.  The first two were destroyers, DD-15 and DD-217, but the most recent was the Knox-class fast frigate, USS Whipple (FF-1062).  When she was commissioned on 22 August 1970, the great-great-great-granddaughter of Abraham Whipple donated a Davis Quadrant, or backstaff, to the ship.  The instrument had been manufactured for Abraham Whipple in 1758 by ­­­­­Benjamin King, a marine instrument maker in Newport, Rhode Island.  The Davis Quadrant stayed with the ship until she was decommissioned in 1992.  The latest Whipple was struck from the Naval Vessel Register in 1995 and subsequently given to the Mexican Navy and where she continues to serve under the name ARM Mina (F-214). 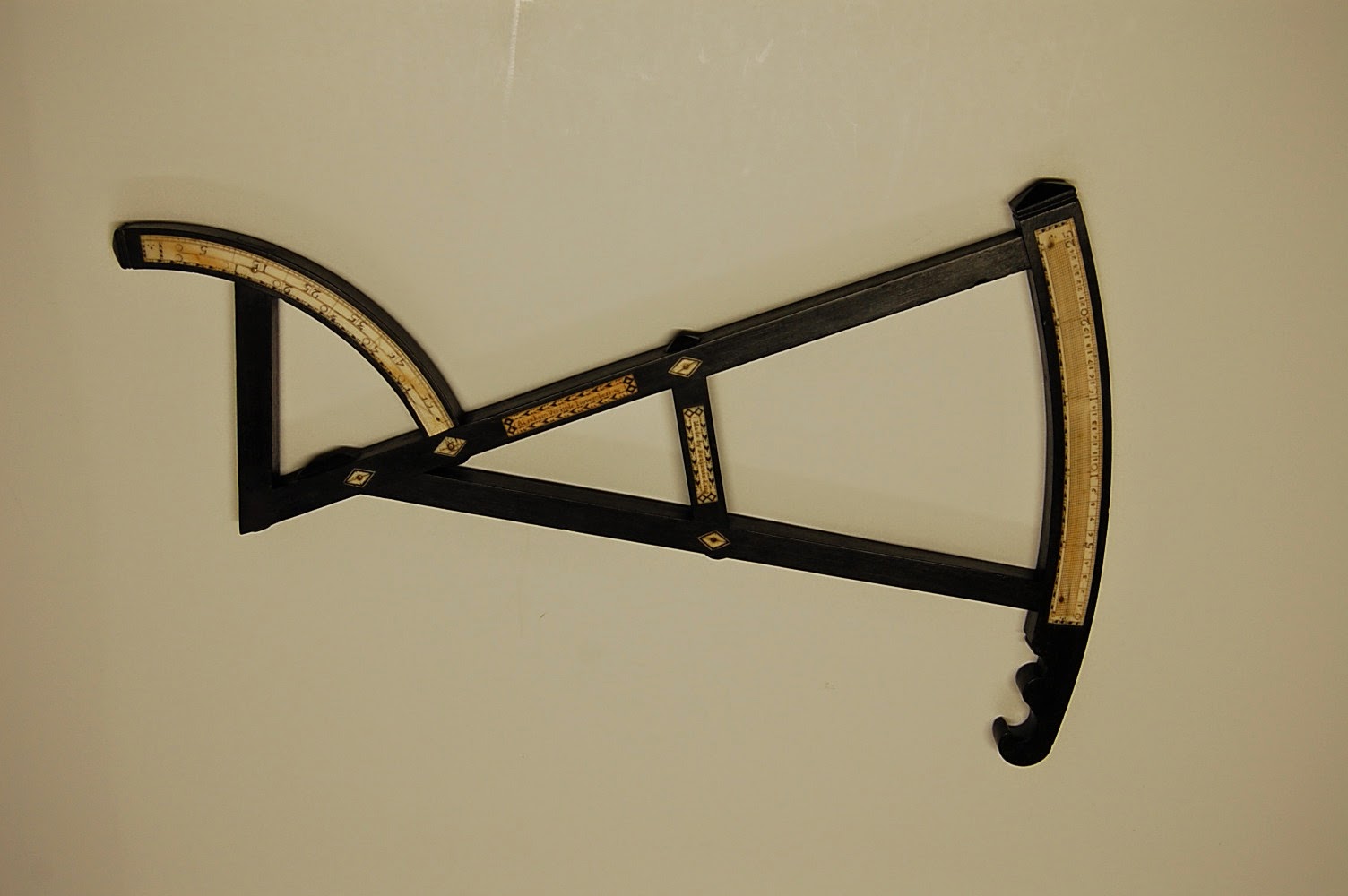 The basic quadrant was quite simple to use and required only that you sight on one edge the celestial body that you sought, usually the sun or Polaris, the North Star.  Hanging down from the top of the instrument would be a piece of rope with a weighted object on the other end.  Where the line crossed the scale would provide you with the angular height of that body.  Once you had the height you could then determine your latitude while at sea.  That fact along with the latitude of the port that you were seeking would enable you to proceed to your destination.  Using such an instrument with the sun, however, forced the user to look into direct sunlight, causing eye damage over time.  The first documented use of the navigational quadrant was around 1400, although its use is considered to be earlier.

In approximately 1590, an Englishman named John Davis created an instrument that became known as the backstaff or the Davis Quadrant.  The instrument allowed the user to have his back to the sun, hence the name.  This became the instrument of choice by navigators and, with its acceptance, replaced the cross staff, astrolabe, and quadrant, thereby saving the sight of many navigators.  The Davis Quadrant would be the standard instrument for the next 200 years.

Abraham Whipple’s Davis Quadrant, following its association with the last Whipple, was given to the Navy History and Heritage Command (NHHC) and placed in storage at the Navy Yard in Washington, D.C.  There it sat until recently discovered by the staff of the Naval War College Museum.  Once re-discovered, the instrument was materially conserved by NHHC and shipped to the Naval War College Museum where it is now on display in the updated Whipple exhibit.